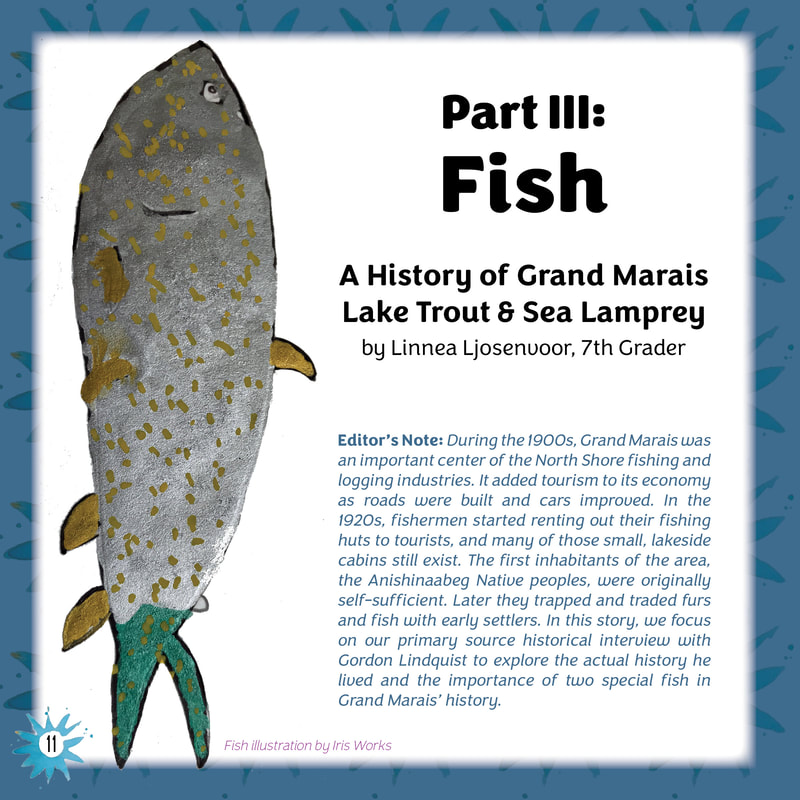 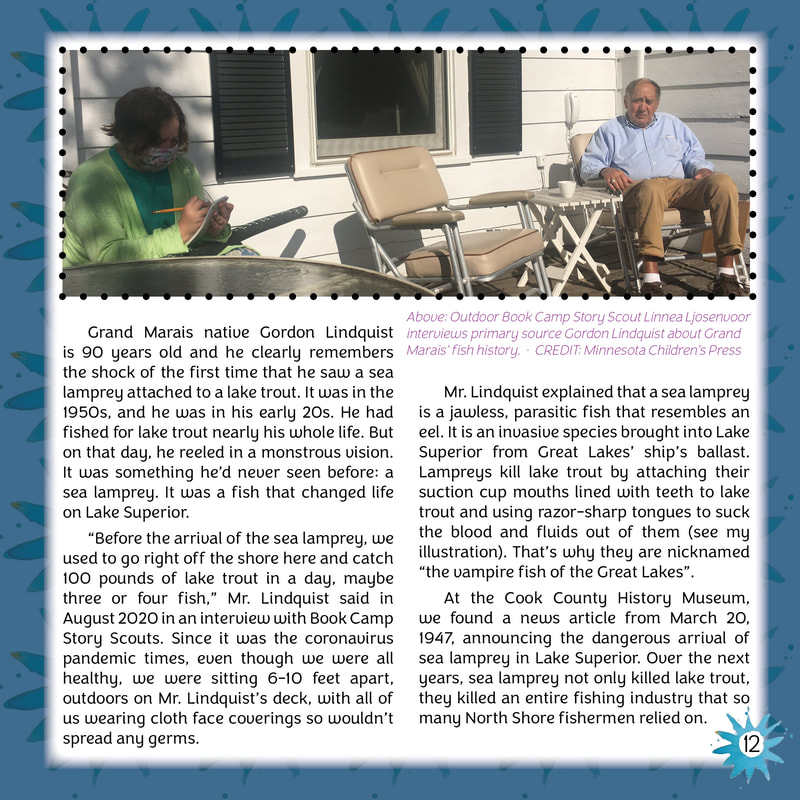 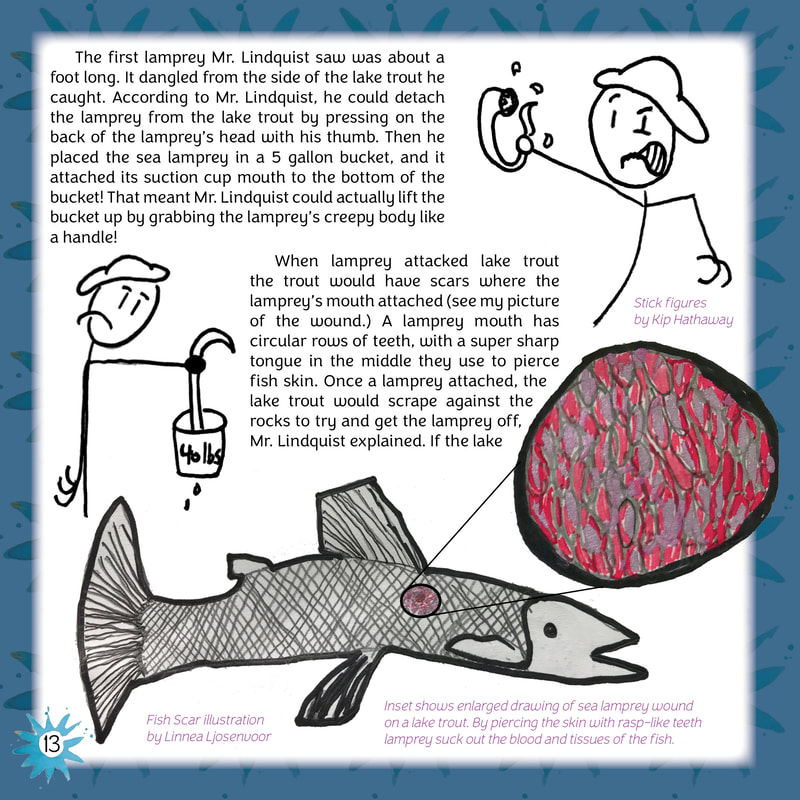 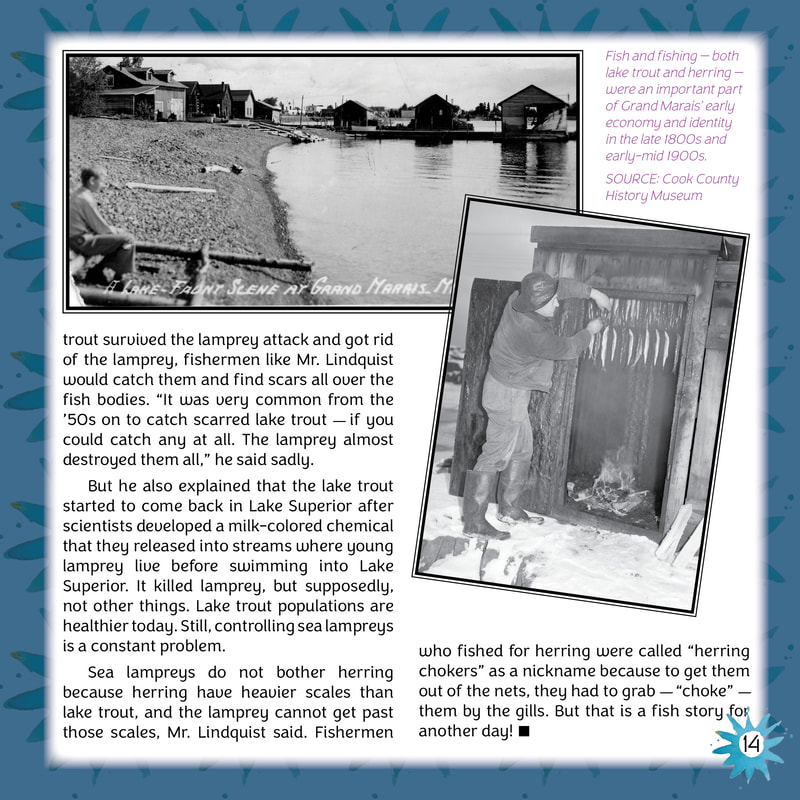 ​Editor’s Note:
​During the 1900s, Grand Marais was an important center of the North Shore fishing and logging industries. It added tourism to its economy as roads were built and cars improved. In the 1920s, fishermen started renting out their fishing huts to tourists, and many of those small, lakeside cabins still exist. The first inhabitants of the area, the Anishinaabeg Native peoples, were originally self-sufficient. Later they trapped and traded furs and fish with early settlers. In this story, we focus on our primary source historical interview with Gordon Lindquist to explore the actual history he lived and the importance of two special fish in Grand Marais’ history.
Grand Marais native Gordon Lindquist is 90 years old and he clearly remembers the shock of the first time that he saw a sea lamprey attached to a lake trout. It was in the 1950s, and he was in his early 20s. He had fished for lake trout nearly his whole life. But on that day, he reeled in a monstrous vision. It was something he’d never seen before: a sea lamprey. It was a fish that changed life on Lake Superior.
​
“Before the arrival of the sea lamprey, we used to go right off the shore here and catch 100 pounds of lake trout in a day, maybe three or four fish,” Mr. Lindquist said in August 2020 in an interview with Book Camp Story Scouts. Since it was the coronavirus pandemic times, even though we were all healthy, we were sitting 6-10 feet apart, outdoors on Mr. Lindquist’s deck, with all of us wearing cloth face coverings so wouldn’t spread any germs.

Mr. Lindquist explained that a sea lamprey is a jawless, parasitic fish that resembles an eel. It is an invasive species brought into Lake Superior from Great Lakes’ ship’s ballast. Lampreys kill lake trout by attaching their suction cup mouths lined with teeth to lake trout and using razor-sharp tongues to suck the blood and fluids out of them (see my illustration). That’s why they are nicknamed “the vampire fish of the Great Lakes”.

At the Cook County History Museum, we found a news article from March 20, 1947, announcing the dangerous arrival of sea lamprey in Lake Superior. Over the next years, sea lamprey not only killed lake trout, they killed an entire fishing industry that so many North Shore fishermen relied on.

But he also explained that the lake trout started to come back in Lake Superior after scientists developed a milk-colored chemical that they released into streams where young lamprey live before swimming into Lake Superior. It killed lamprey, but supposedly, not other things. Lake trout populations are healthier today. Still, controlling sea lampreys is a constant problem.
​
Sea lampreys do not bother herring because herring have heavier scales than lake trout, and the lamprey cannot get past those scales, Mr. Lindquist said. Fishermen who fished for herring were called “herring chokers” as a nickname because to get them out of the nets, they had to grab — “choke” — them by the gills. But that is a fish story for another day! ■