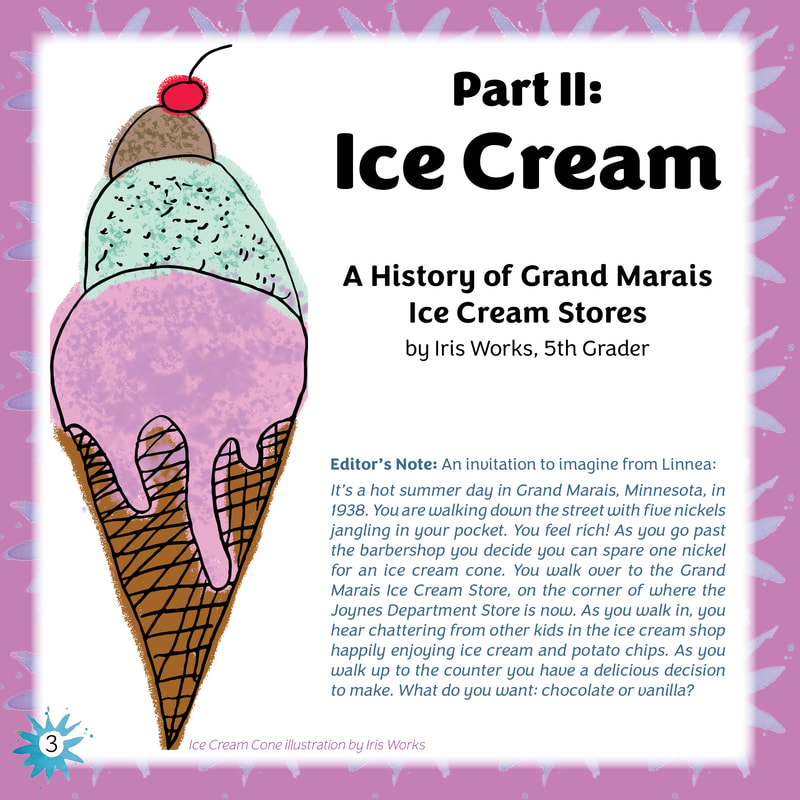 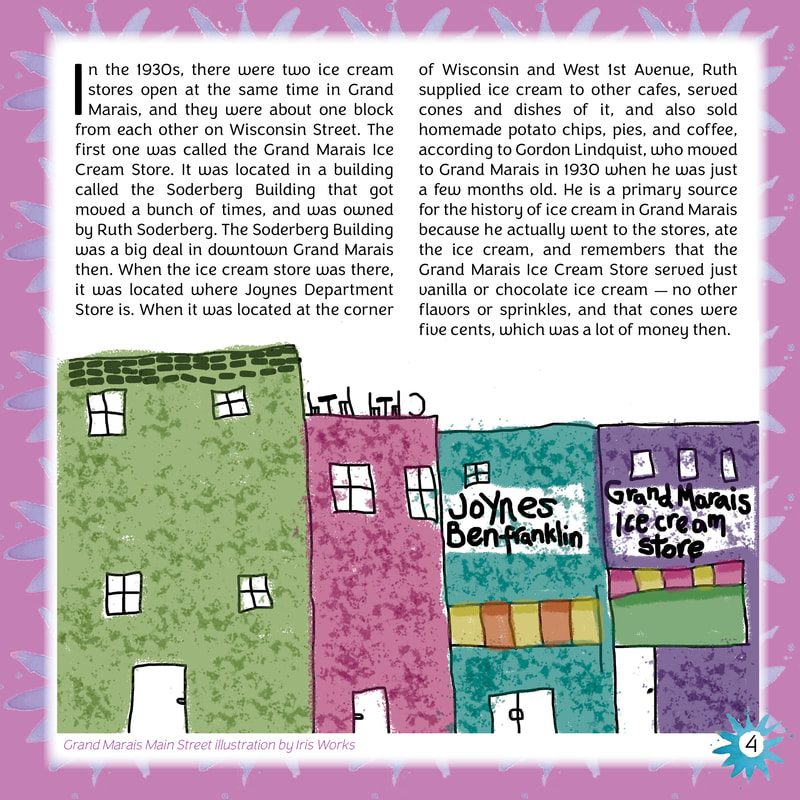 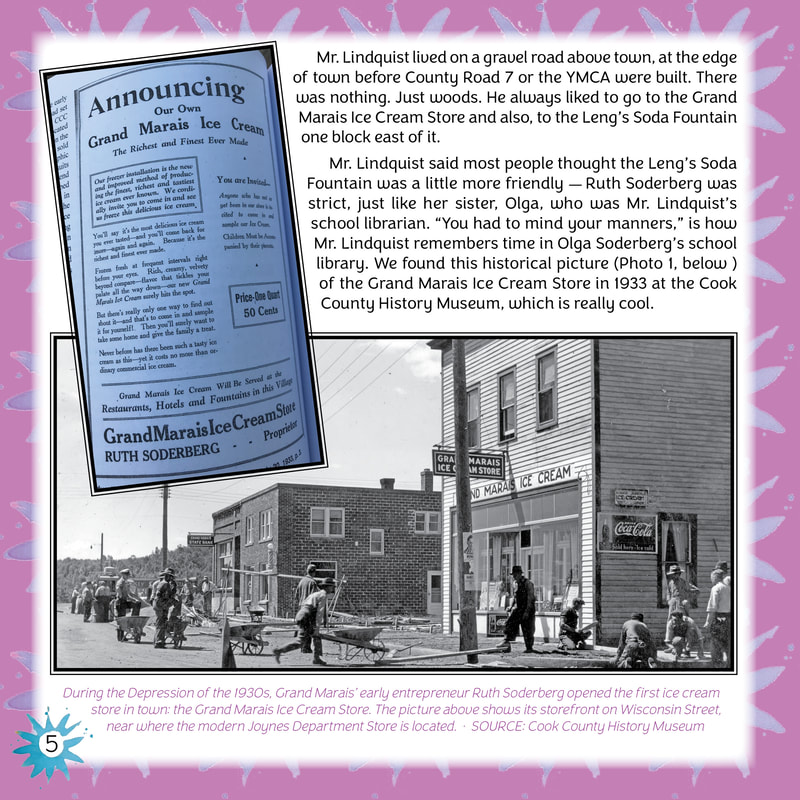 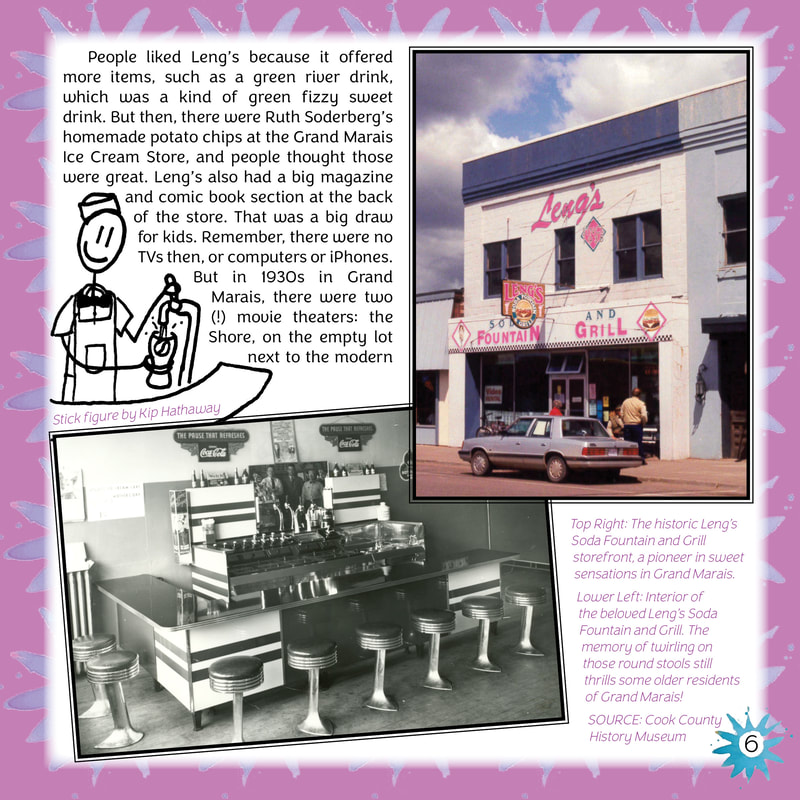 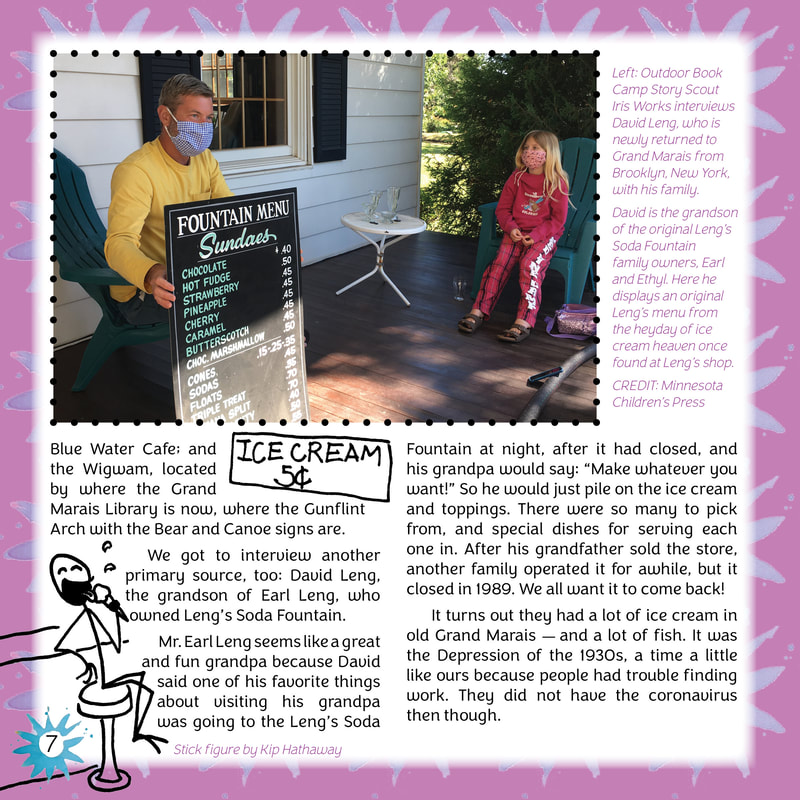 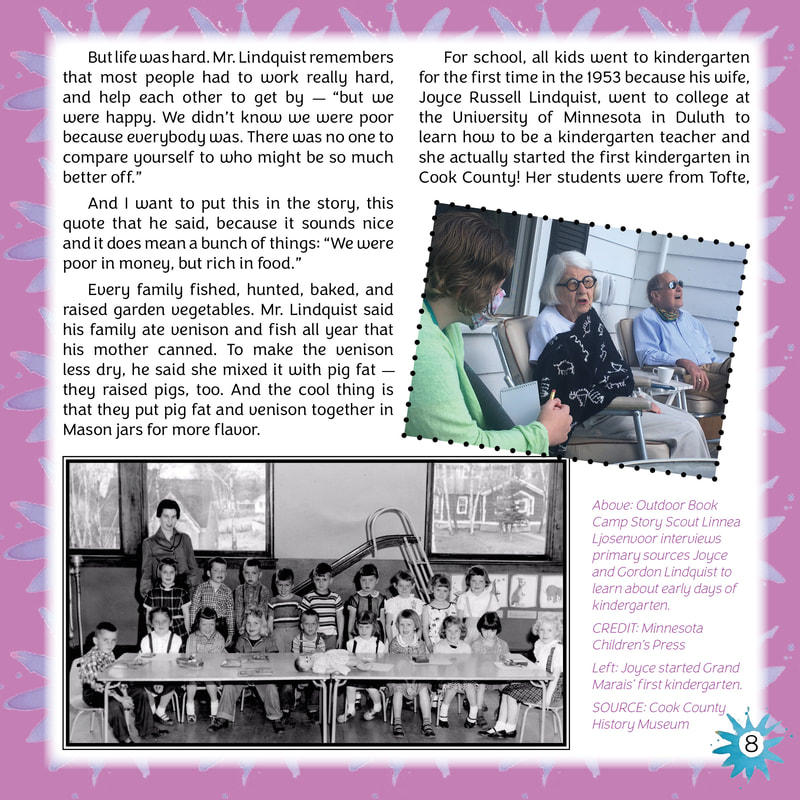 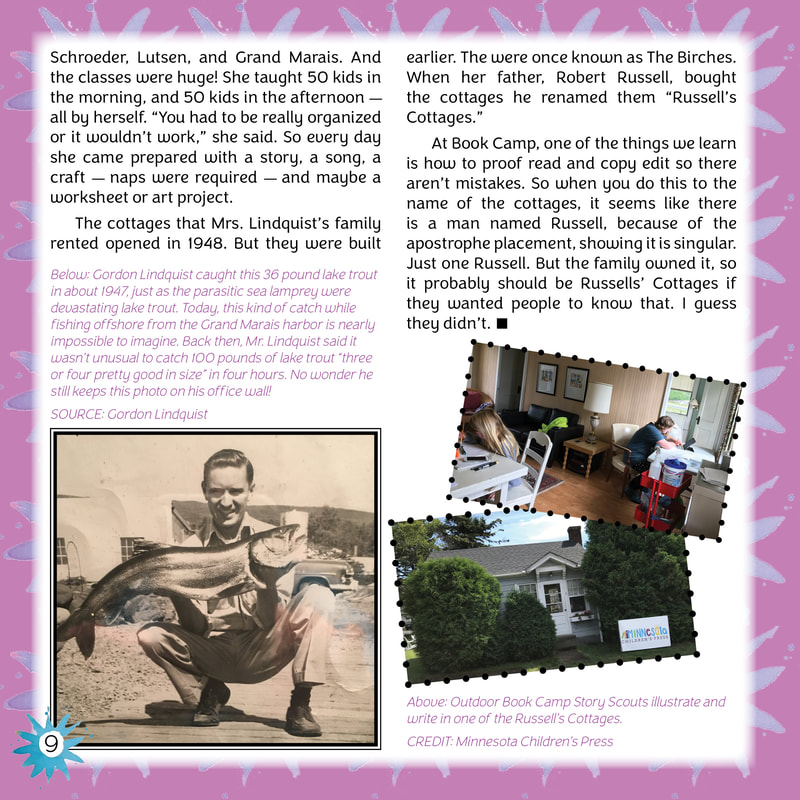 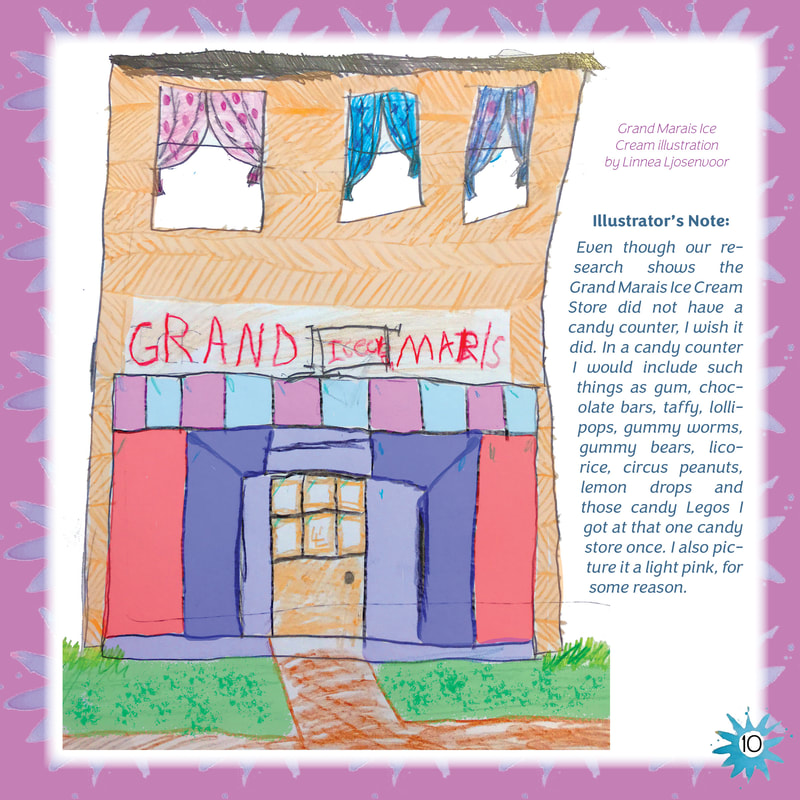 ​Editor’s Note:
An invitation to imagine from Linnea: It’s a hot summer day in Grand Marais, Minnesota, in 1938. You are walking down the street with five nickels jangling in your pocket. You feel rich! As you go past the barbershop you decide you can spare one nickel for an ice cream cone. You walk over to the Grand Marais Ice Cream Store, on the corner of where the Joynes Department Store is now. As you walk in, you hear chattering from other kids in the ice cream shop happily enjoying ice cream and potato chips. As you walk up to the counter you have a delicious decision to make. What do you want: chocolate or vanilla?
In the 1930s, there were two ice cream stores open at the same time in Grand Marais, and they were about one block from each other on Wisconsin Street. The first one was called the Grand Marais Ice Cream Store. It was located in a building called the Soderberg Building that got moved a bunch of times, and was owned by Ruth Soderberg. The Soderberg Building was a big deal in downtown Grand Marais then. When the ice cream store was there, it was located where Joynes Department Store is. When it was located at the corner of Wisconsin and West 1st Avenue, Ruth supplied ice cream to other cafes, served cones and dishes of it, and also sold homemade potato chips, pies, and coffee, according to Gordon Lindquist, who moved to Grand Marais in 1930 when he was just a few months old. He is a primary source for the history of ice cream in Grand Marais because he actually went to the stores, ate the ice cream, and remembers that the Grand Marais Ice Cream Store served just vanilla or chocolate ice cream — no other flavors or sprinkles, and that cones were five cents, which was a lot of money then.

Mr. Lindquist lived on a gravel road above town, at the edge of town before County Road 7 or the YMCA were built. There was nothing. Just woods. He always liked to go to the Grand Marais Ice Cream Store and also, to the Leng’s Soda Fountain one block east of it.

Mr. Lindquist said most people thought the Leng’s Soda Fountain was a little more friendly — Ruth Soderberg was strict, just like her sister, Olga, who was Mr. Lindquist’s school librarian. “You had to mind your manners,” is how Mr. Lindquist remembers time in Olga Soderberg’s school library. We found this historical picture (Photo 1, below ) of the Grand Marais Ice Cream Store in 1933 at the Cook County History Museum, which is really cool.

People liked Leng’s because it offered more items, such as a green river drink, which was a kind of green fizzy sweet drink. But then, there were Ruth Soderberg’s homemade potato chips at the Grand Marais Ice Cream Store, and people thought those were great. Leng’s also had a big magazine and comic book section at the back of the store. That was a big draw for kids. Remember, there were no TVs then, or computers or iPhones. But in 1930s in Grand Marais, there were two (!) movie theaters: the Shore, on the empty lot next to the modern Blue Water Cafe; and the Wigwam, located by where the Grand Marais Library is now, where the Gunflint Arch with the Bear and Canoe signs are.

We got to interview another primary source, too: David Leng, the grandson of Earl Leng, who owned Leng’s Soda Fountain.

Mr. Earl Leng seems like a great and fun grandpa because David said one of his favorite things about visiting his grandpa was going to the Leng’s Soda Fountain at night, after it had closed, and his grandpa would say: “Make whatever you want!” So he would just pile on the ice cream and toppings. There were so many to pick from, and special dishes for serving each one in. After his grandfather sold the store, another family operated it for awhile, but it closed in 1989. We all want it to come back!

It turns out they had a lot of ice cream in old Grand Marais — and a lot of fish. It was the Depression of the 1930s, a time a little like ours because people had trouble finding work. They did not have the coronavirus then though.

But life was hard. Mr. Lindquist remembers that most people had to work really hard, and help each other to get by — “but we were happy. We didn’t know we were poor because everybody was. There was no one to compare yourself to who might be so much better off.”

And I want to put this in the story, this quote that he said, because it sounds nice and it does mean a bunch of things: “We were poor in money, but rich in food.”

Every family fished, hunted, baked, and raised garden vegetables. Mr. Lindquist said his family ate venison and fish all year that his mother canned. To make the venison less dry, he said she mixed it with pig fat — they raised pigs, too. And the cool thing is that they put pig fat and venison together in Mason jars for more flavor.

For school, all kids went to kindergarten for the first time in the 1953 because his wife, Joyce Russell Lindquist, went to college at the University of Minnesota in Duluth to learn how to be a kindergarten teacher and she actually started the first kindergarten in Cook County! Her students were from Tofte, Schroeder, Lutsen, and Grand Marais. And the classes were huge! She taught 50 kids in the morning, and 50 kids in the afternoon — all by herself. “You had to be really organized or it wouldn’t work,” she said. So every day she came prepared with a story, a song, a craft — naps were required — and maybe a worksheet or art project.

The cottages that Mrs. Lindquist’s family rented opened in 1948. But they were built earlier. The were once known as The Birches. When her father, Robert Russell, bought the cottages he renamed them “Russell’s Cottages.”

At Book Camp, one of the things we learn is how to proof read and copy edit so there aren’t mistakes. So when you do this to the name of the cottages, it seems like there is a man named Russell, because of the apostrophe placement, showing it is singular. Just one Russell. But the family owned it, so it probably should be Russells’ Cottages if they wanted people to know that. I guess they didn’t. ■